Beers Made By Walking in Beer West Magazine! 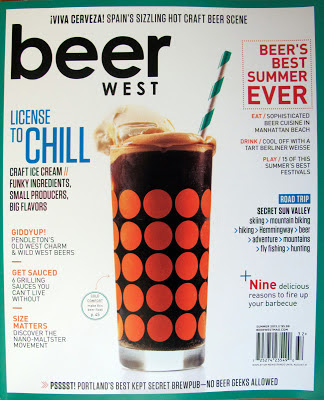 June 2013 /
The in-print Summer 2013 Beer West Magazine features an article about connecting beer to the environment, or outdoors, in some capacity. Beers Made By Walking is talked about, at length, along with Hikes and Pints and other organizations. You can download and read the article here.


More information about Beer West:
Since 2007 Beer Northwest has grown to become the leading beer culture and lifestyle magazine in the Northwest and in January 2011, the magazine expanded into California and became Beer West. With the expansion, we are continuing to bring new readers into the thriving West Coast beer market, and with it also comes fresh design concepts, innovative stories, and even more of the compelling beer lifestyle content that’s been connecting so well with thousands of readers for the past four years.

The only regional publication of its kind, Beer West has more than doubled its circulation and visibility in the past year, and with a focused readership of 80,000 beer and food enthusiasts in the West and beyond, it’s the perfect medium for your message. From the surfing towns and hoppy IPAs of Southern California to the snow-capped mountains and barrel-aged sours of Oregon and Washington, Beer West is a celebration of the unique Western beer-loving life.
Posted by Eric at 1:05 PM